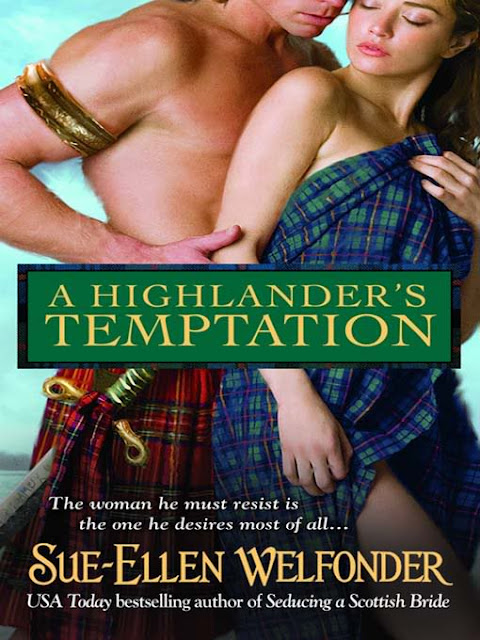 I was asked to read and review A Highlander’s Temptation by Sue-Ellen Welfonder. The story is set in 14th century Scotland, a time when hostilities were high among the various Highland clans. The heroine of the story is the young and beautiful Arabella MacKenzie, daughter of the chief of clan MacKenzie. While on a sea voyage to a set of islands, Arabella I forced to abandon ship. The following day, she is found offshore of an island owned by the clan MacConacher. Darroc, the hero of the story, is happy to help her, until he learns her name. The MacConachers hate the MacKenzies for atrocities committed against their clan in the past. Unfortunately for Darroc, he falls for the one woman he knows he should hate.

Think of this book as a Scottish rendition of Shakespeare’s Romeo and Juliet- feuding families and a love that seems doomed from the beginning. I enjoyed this book! It was a quick and easy read, and the story kept me interested throughout. There was certainly no shortage of action or drama! This book has a smattering of everything- battles, magic, paranormal activity, and romance. I became very attached to characters, and even caught myself getting a bit misty-eyed at one point in the story.

I particularly enjoyed the interactions between the MacConacher men. Whenever Arabella was around, they had fun picking on Darroc (A lot of that “wink-wink-nudge-nudge sort of humor, if you know what I mean!). The crazy old woman who helped around the castle was also very amusing- she was convinced she was helping when often the men had to go behind her and correct the wreckage she was causing! The author did a nice job of developing the characters, even the minor ones who only played supporting roles to the storyline. By doing this, the author develops an entire community of which the reader is able to become a part.

Something that caught my attention was that some of the names were a bit silly in this book. A Viking with the name Olaf Big Nose would certainly not inspire his foes to go running with their tails between their legs! There’s also a relic in this story that the clans call the “Thunder Rod”. Can you guess what sort of power it has? No? Think hard! Thunder. Rod. Have you got it now? My mind had wandered into that gutter long before they explained the extent of its powers later in the book! I understand the purpose behind the names used, however it was difficult to take them seriously each time they arose in the book.

I wasn’t a particularly big fan of the paranormal aspect of the storyline. Essentially, the ghost of a jaded female haunted the castle and enjoyed meddling in the affairs of Darroc and Arabella. However, in the end, her role had absolutely no bearing on the storyline aside from being a relic of a tale they told around the castle about a girl who had been left to die there long ago. I normally enjoy the paranormal aspect of stories, however I think in this situation that the story would not have been any different without it.

I will say I was a bit disappointed towards the end. Clan MacConacher and Olaf Big Nose’s warriors headed off to sea battle, and without giving too much away, I would have to say I felt it was incredibly anticlimactic! It almost seemed as if the author rushed towards the end of the book. To remedy this, it’s as if she created situations in which everything was able to happen in an expedited manner. That being said, I will say I appreciate her brevity in some cases. I do not feel the need to experience days of wallowing in self-pity when I can just as easily catch the gist from the statement, “He had been miserable for days.”

All in all, this was a good book. It didn’t take long to read, and didn’t have a complex plot. If you’re looking for a nice, light romance novel, definitely give this one a try!
Posted by Author at 1:45 AM